The Ghost Bride by Yangsze Choo can be placed under many genres – a work of literary fiction, it can also be easily categorised as historical, paranormal, YA, multicultural or mystery novel. It is one of those books that transcend genre and can be read by various categories of readers for the pure pleasure of reading a book with an unusual premise, a fantastic setting, a gripping narrative and well developed characters. 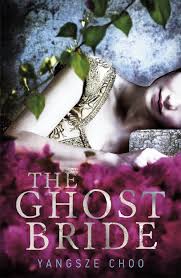 Set in colonial Malaya in the 1890s, The Ghost Bride narrates the story of seventeen year old Li Lan who is compelled due to her family’s penurious circumstances to consider marrying a dead young man based on the ancient Chinese custom of arranging marriages for dead people.

Li Lan is surprised when her father informs her about the proposal from the wealthy and influential Lim family seeking her hand for their son Lim Tian Ching who had died a few months earlier. Her father has neither the means nor the active will to seek a suitable match for her as he lives out his days in a haze of opium and memories of her mother. It does not help that Li Lan does not have much of a social life and sees no one except her father, nursemaid and cook who make up their household. Lim Tian Ching’s mother pursues Li Lan with invitations to Mahjong games and musical soirees at the Lim family mansion where Li Lan meets Tian Bai, Lim Tian Ching’s cousin and the present heir to the Lim fortune and falls in love almost immediately with him. But soon Lim Tian Ching begins to haunt Li Lan in her dreams and in her bid to get rid of the nightmares of his ghostly wooing, Li Lan finds herself trapped in the spirit world, where she must confront not only the conspiracies of the Lin family but also the secrets of her own past.

The book takes the reader on a fast paced tour of Malaysia when it was Malaya and the Chinese afterworld, stopping now and then to explain the context and describe the surroundings – such as the Chinese folktale of the cowherd and the weaving maiden which is celebrated as a festival on the seventh day of the seventh month, the politics of the afterlife which replicate the world that they had left behind for both rich and poor ghosts, ridden as it is with conspiracies, greed, lust, struggle for power and corrupt border officials who can be bribed to delay the passing of ghosts from one realm to the next where retribution awaits them.

The side characters are a most interesting lot – Li Lan’s stern but well meaning Amah, the old cook who can see ghosts, the ghost woman Fan who hovers around her lover’s house draining him stealthily of his life force, the vicious concubine of Li Lan’s grandfather who takes her revenge from the afterlife, the medium who foresees Li Lan’s journey into the afterworld, the old maid at the Lim’s ghostly estate who guards a secret related to Li Lan and the dashing and mysterious Er Lang, all of them including the ghostly characters come alive through the pages.

What I liked about the book: Almost everything. I especially liked two aspects – one was the realistic characterisation of the heroine and the way she was shown to be changed as a result of her curious journey through the afterlife. Bookish and logical, Li Lan is hardly a perfect heroine. When her Amah tells her the love story of the cowherd and the heavenly sewing maiden, the child Li Lan is more interested in why the cowherd’s ox was able to speak and how it knew about the heavenly maidens, rather than the pathos of the love story. Unexposed to high society or even regular social interactions, when she is invited to the Lim mansion for the first time, she stares uninhibitedly at the opulence around her and eats her way through several platters of Malaysian delicacies. As the story progresses, from a lovestruck teenager who is uncertain of her fate, she grows into a mature person who is able to see things as they are and take strong life decisions.
The other thing that I loved about the book was its highly polished narrative, both the elegant descriptive prose and the subtle foreshadowing. For example (mild spoilers ahead), how the symbolism of Tian Bai presenting Li Lan with a watch is tied with Li Lan’s excursion soon after into the afterlife. This is linked to the Chinese belief that gifting a clock or a watch should be avoided as it measures out the days of the recepient’s life. Also the meeting between Li lan and Tian Bai at the Double Seventh festival, the symbolism of which is highlighted touchingly towards the end. (spoilers end)

A delectable treat that will appeal to both readers of literary and commercial fiction, this book is a dream debut for a first time author – it is as likely to be on several literary prize shortlists as it is to be on many  bestseller lists.