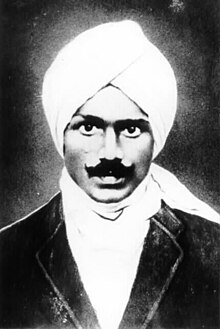 A note of thanks to Subramaniya Bharatiyar.

As a writer who grew up in Chennai in a Tamil speaking family, it is almost a cliche to say that your poems have influenced me. I was taught to sing your songs almost as soon as I began to speak and I grew up hearing them sung and quoted almost everywhere – on the television and radio, in school functions and in social events. When I was a child, you were so much a part of my life that I took your verse for granted just like the sun, the moon, the stars and the skies.

It was much later in life when I started to read poetry seriously that I began to realise the greatness of your work. While enjoying the crow poems of Ted Hughes, I was exhilarated to think of your verse that related the dark wings of the crow not to the apparent references of death and destruction, but to the divine presence.

Your complete works have been on my desk since I was nineteen years old. I have dipped into your poems frequently, savouring not only the beauty of your verse but also the way in which you present profound philosophy in simple language, your futuristic vision, the humanity that shines through your words and above all, the bliss of being a poet that permeates your work.

I find myself quoting you in my writing sometimes, as naturally as I write, for your words are a part of my language and my life.

It has been over ninety years since you passed. Your songs are still read, cherished, sung and loved by both the finest classical musicians as well as the semi literate peasants – like all great artists, you belong to everyone. I admire the way you continue to live and breathe through your verse.

Thank you for being as much of an inspiration in my life as the stars and the skies.

One thought on “The #ThankAWriter Project Letter 3”